Esporão & Portuguese Food Liking It Self

After “The Portuguese Music Liking It Self”, the director and documentary filmmaker Tiago Pereira joins with Esporão on a new project which aims to inform and enhance the Portuguese culinary heritage.

So we embrace together the challenge of building a digital library as a result of an ethnographic approach to Portuguese cuisine. This project fulfills another step in our mission to preserve the memory and the Portuguese intangible heritage, with the sharing of traditions of our cuisine and a new contemporary look: 15 Portuguese chefs are invited to create their unique and creative version of traditional recipes and regional.
Tiago Pereira and spur revisit the regions of the country revealing the richness of cultural and culinary diversity hidden, giving it the deserved visibility from Youtube, Facebook and Instagram. Make the trip with us, the traditional flavors of your own.

In fishermen’s land, in the village of Palhota, we cook an episode inspired by the roots and the tradition of the area. The Azambuja is a region with a strong connection to the sea and the river, even in times of crisis, have always known how to improvise and with the resources available fabricate tasty dishes. Ze Miguel Amador, besides humming some songs have also been a lot in the sea and it was there that he learned how to cook with what the water brought to him. The stew Eels was one of those recipes that a person does not forget and he insisted on cooking for us. The chef Pedro Pena Bastos, guest chef of this episode, heard all the teachings of Ze Miguel and recalling a stew made by his grandmother, recreated a new recipe. 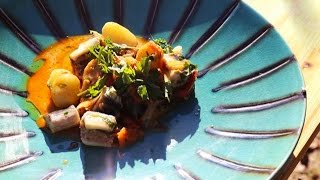 "All with the suffix, to like her own, self-esteem is accurate, not because any of these things does not like itself, but because the people who keep alive these practices need to be praised and valued (...) We will be able to give voice not only to the delicious recipes of "cozinhadeiras" old ladies but also provide visibility for chefs and cooks who fight daily for the preservation of Portuguese cuisine values and its traditions."